Skip to content
To dream you must have faith. To command requires conviction. To fail is not an option. Sixteen-year-old Zach Aurelian has held the same dream since he was eight years old—to attend the Earth Alliance Fleet Academy and train to become a command officer like his mother, who went missing in the system-wide civil war that fractured the Alliance. He believes in his soul that she’s still alive, and is determined to reach the stars to find her, no matter the challenge. Zach soon learns that not only will he face down his anxiety disorder and the rigors of the Academy, but the ghosts of his mother’s past who would stand in his way.

I first discovered J.C. Mastro thanks to the brilliant anthology Dragons of a Different Tail (because I’m shameless, click here to read my review), where he not only served as one of its editors but also wrote my favourite story in the collection, the absolutely bonkers Spirit of the Dragon. Given my love of that story, I had high hopes for his debut novel, but found myself woefully unprepared for just how wonderful Academy Bound would be.

Set somewhere in the future where society has taken to the stars and the Earth Alliance has been in war against the Independent Colony Worlds, Academy Bound tells the story of sixteen-year-old Zacharia Aurelian as he joins the Fleet Academy with the dream of fighting for the Earth Alliance as a command officer. Not only is he determined to fight for his home planet, Zach dreams of discovering his mother, who also fought with the Fleet before disappearing in action, is alive and well. This is a science fiction tale geared towards the young adult market: part coming of age story, part school drama, part military thriller, part mystery, part action adventure. All these parts come together to form a wonderful whole and do so amazingly well.

While this is a novel geared towards the YA crowd, throughout the book, the story is told with a level of maturity that can sometimes be lacking in the genre. The characters in the book, especially the protagonist Zach, act their age. They are sixteen-year-olds with the maturity you would expect sixteen-year-olds to have. These characters aren’t perfect, and on a number of occasions, Zach makes mistakes and acts immaturely, evidenced not just by the character’s behaviour, but through his thoughts about these mistakes as articulated through his first person narration. He sees the world through a sixteen-year-old’s lens, and this is written in a manner that feels real to the reader. Readers of a similar age will recognise their thoughts and fears in him, and older readers (including those of us who have not had to deal with teenage issues for far too many years) will recollect how it felt to be a sixteen-year-old.

Furthermore, I need to draw attention to Academy Bound‘s depictions of mental health. Zach lives with anxiety that influences his thoughts, feelings, and actions. The book doesn’t dwell on this, but it plays into the book’s plot beautifully and plays an important role in the protagonist’s narrative. As somebody who lives with anxiety, I appreciate how beautifully it was presented in the book, but more than that, I truly love how honestly Mastro portrayed it. Additionally, many of the characters are dealing with issues of their own and are impacted by the novel’s events. Each and every one of these instances feels incredibly real.

Despite Academy Bound’s maturity and emotional realism, it charmed me from the very moment I started reading. Zach’s narration is a joy to read. The prose is written in a way that draws the reader in and keeps them smiling. The paragraphs are easily digestible, which suits the YA audience, and keeps everything moving at a quick pace. It is a testament to Mastro’s writing that in doing so he has kept this quick pace while articulating everything the reader needs to know, whether it is about characters, the protagonist’s thoughts, descriptions about the world, or the plot’s exposition. At 309 pages in paperback (and an estimated 279 pages in eBook formats), this book is a moderate length. Though not particularly lengthy, at no point did it ever feel like the author made any sacrifices to accommodate its length, or to balance the story requirements with readability for a younger audience.

Academy Bound is deftly plotted as the book weaves its coming of age story, military intrigue and ongoing mystery that drives the reader through. There is a lot for it to get through, and it does so wonderfully, drawing the reader in and keeping them hooked. Throughout, Mastro doesn’t completely avoid the tropes that come with YA and military fiction. While some twists took me by surprise, others panned out exactly the way I expected them to. However, these tropes mattered very little, as the book engaged me throughout and brought me along the journey.

As the plot continued through the book, while this is a story about the military, I appreciated the shades of grey that it raised. Academy Bound successfully questions the morality of war and the nature of assuming we are on the “right” side, and while it delve deeply into these matters, it plants some great seeds. This is the first part of a series, and perfectly self-contained, but with the trajectory of these themes, I am curious to see where subsequent books take these.

The cast of characters is an absolute delight to read. Zach is a wonderful protagonist, three-dimensional for good and bad. His friends are a joy to read, and his enemies, while some are certainly ones you love to hate, all have their motivations for being antagonistic. Every character in Academy Bound is fully realised, and at no point does a single character feel like they’re being used to simply fill space. The characters work with the plot and vice versa, with neither feeling more important than the other.

Academy Bound, from start to finish, is an absolute joy to read. If you’re a fan of young adult stories, science fiction, mysteries, military tales, or even if you appreciate a well-plotted book and great characters, there is so much here to love. There really is something for everybody, and even if you’re not a fan of some of the genres this crosses, there will be enough of everything else to keep you delighted. I can’t recommend this highly enough.

“After you, m’lady,” I say, making a dramatic ushering motion with my arm.

Academy Bound was provided by the author for the purpose of an honest review.

Academy Bound will be available in paperback and eBook forms from retailers, including—but not limited to—Amazon from 6 August, 2022. Hardcover and Audible versions will follow in the near future. 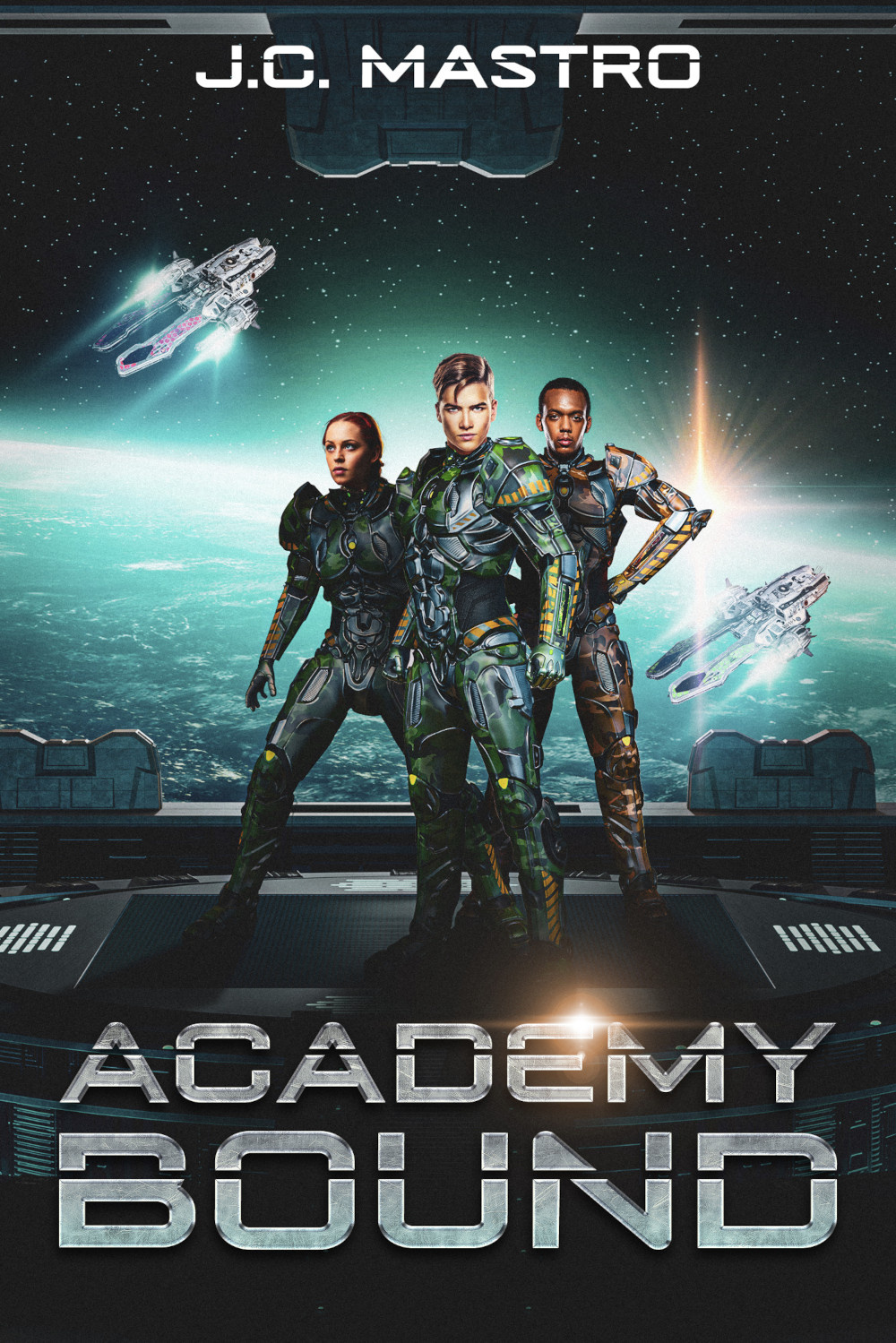