Skip to content
Food fights. Detention. Dissecting fairies for science class. Just another day for teachers at a Magical Public School. Pavlina Sirin’s fate as a death harbinger has ruined her life. She longs to be more than a herald of doom, aspiring to impact lives in her teaching career. But when a new student with bold dreams joins her class, Pavlina’s dark power senses a terrible sacrifice to come. Fin MacCool’s warrior past didn’t prepare him for a hundred years of teaching for his community service. Spending the last decade of his sentence at a new school, the immortal develops a crush on his tempting but aloof coworker. The Irish legend blows his chance when he butts heads with the Council of Pantheons’ latest brave heroine—who also happens to be Ms. Sirin’s favorite pupil. However, the Chosen One’s quest isn’t all it seems. Pavlina’s lethal prophecies come to pass, and her gift warns of more to come. Will this daring trio of heroes have what it takes to make the grade, or will they fail before they even make it to Summer Break? Set in an alternate reality of Jacksonville, Florida, this adult urban fantasy is the first book in the Secret of Pantheons series. If you enjoy a hearty helping of mythology, found family, and unbreakable bonds, this book is for you. Class is in session with Heroes & Harbingers—delve in now before the bell rings!

As I start this review, please allow me to make a confession: I’m a little bitter than for her fourth novel, author A.R.K. Horton has left the world of Telverin (as established in Struggling With the Current, Flirting With the Tempest and Racing With the Serpent – click those links for my reviews). Sure, the Telverin Trilogy came to a mighty, decisive and rewarding end, but the world is ripe for further exploration. I can’t hold too much of a grudge, however; the Secret of the Pantheons world Horton introduces readers to here is another beautifully fantastic setting ripe with storytelling potential. And Heroes & Harbingers is her greatest accomplishment yet.

Heroes & Harbingers tells the story of Gabriella “Bree” Castille, a student at the Annie Lytle Magical Magnet High School (in the acknowledgements, Horton reveals this is named after the Annie Lytle Preservation Group, working to restore the real-life school—in this reality. If you would like to donate to the cause, a link is provided in the book, but you can also click here). Here, she meets two teachers who will inspire her in their own ways, Ms. Pavlina Sirin, a mythological sirin, and Mr. Finn MacCool, the Irish mythological figure).

Described on the cover as an “adult fantasy academia novel,” Heroes & Harbingers features a small amount of adult content, including death and grief, pregnancy loss and substance abuse. Despite this, and the fact that two of the three lead characters are very much adults, this is largely appropriate for, and will no doubt appeal to younger readers, particularly those in the Young Adult market. Taking place in a magical school, Heroes & Harbingers will no doubt lead to comparisons with the Harry Potter series of books. But Harry Potter this isn’t. It may star a magical student destined to cast a legacy, but goes much further. And for all of Hogwarts’ majesty, Annie Lytle is a far more intriguing location.

There are certainly shades of Buffy the Vampire Slayer contained within, with Bree being the “Chosen One,” and her relationship with her mentor reminding me of Buffy’s Slayer/Watcher dynamic. Most of all though, while the plot and setting are far removed from his work, the way Horton infused mythology into Heroes & Harbinger’s reality, and her unique takes of various myths from the world’s history, reminded me of Neil Gaiman’s work. The book builds an intricate world full of mythology in a way that feels distinct, but perfectly natural.

Heroes & Harbingers’ three lead characters are an absolute delight to read. Horton has created three brilliant characters, all of whom could have carried this book on their own had she used them as the sole protagonist. Each of these characters is fully realised, with their own histories and tragedies, their own motivations, and their own worldviews. The three characters together make for a wonderful trio that you can’t help rooting for as the book progresses. There are a number of side characters throughout the book, and while many are delightful characters, some aren’t, but nonetheless, they are all thoroughly entertaining to read.

At 320 pages in paperback (or an estimated 342 swipes on your favourite eReader), Heroes & Harbingers has plenty of room to breathe, without it feeling overlong. The plot takes place over an entire school year, and as a result, has various ebbs and flows. By necessity, the pace speeds up and slows down. While this could result in the slower parts of the book feeling like they are filling in space, this is never the case. Throughout the book, I was drawn in, wanting to know where the story was going to go next. And I was never disappointed, with plenty of twists and turns throughout.

Not only is Heroes & Harbingers packed full of great characters and an enjoyable plot, it also brings a decent amount of heart and emotion. While it never bogs the story down, each character’s backstory, as well as events through the book, pulls at the readers’ heartstrings. Throughout my time reading the book, I felt for the characters, I cared about what they were going through, and I wanted them to get their happy endings.

As is the case with Horton’s Telverin Trilogy, Heroes & Harbingers’ prose is clean and engaging. Horton’s voice is engaging, drawing the reader in and providing them all the information they need to know about this fantastic world without slowing the pacing with info dumps. Throughout, it has a great sense of humour, providing levity which juxtaposes with the dark subject matter nicely, and kept me chuckling along.

While this is indeed the first book in the Secret of Pantheons series, it works perfectly as a standalone book. While the ending opens the door to more adventures to come, this is a promise of more stories to come, rather than teasing a resolution to come at some nebulous point in the future. You can read Heroes & Harbingers as a satisfying standalone novel, though I imagine that most who read this will be eagerly awaiting the second book in the series.

If you’re a fan of fantasy stories or enjoy mythology, I truly recommend Heroes & Harbingers. If you’re a fan of Horton’s Telverin trilogy, I promise you won’t be disappointed. This is a truly wonderful novel, eclipsing the author’s previous works. With an entertaining plot, great characters, intriguing mythology and inviting tone, Heroes & Harbingers is a joy from beginning to end.

“No one from your reality speaks the language here.” The bookdealer’s voice sounded muffled. “Put this fish in your ear.”

“I’m not putting any creature in my ear! Are you crazy!” Mr. Finn yelled, but Bree had to strain to hear him.

The bookdealer groaned. “Haven’t you read any Douglas Adams? He’s the greatest documentarian of any reality. The only way to communicate with the locals is with this fish in your ear. Now, tilt your head.”

Heroes & Harbingers: Secret of the Pantheons, Book One, Chapter 10: “The Museum Trip”

Heroes & Harbingers: Secret of the Pantheons, Book One was provided by the author for the purpose of an honest review. 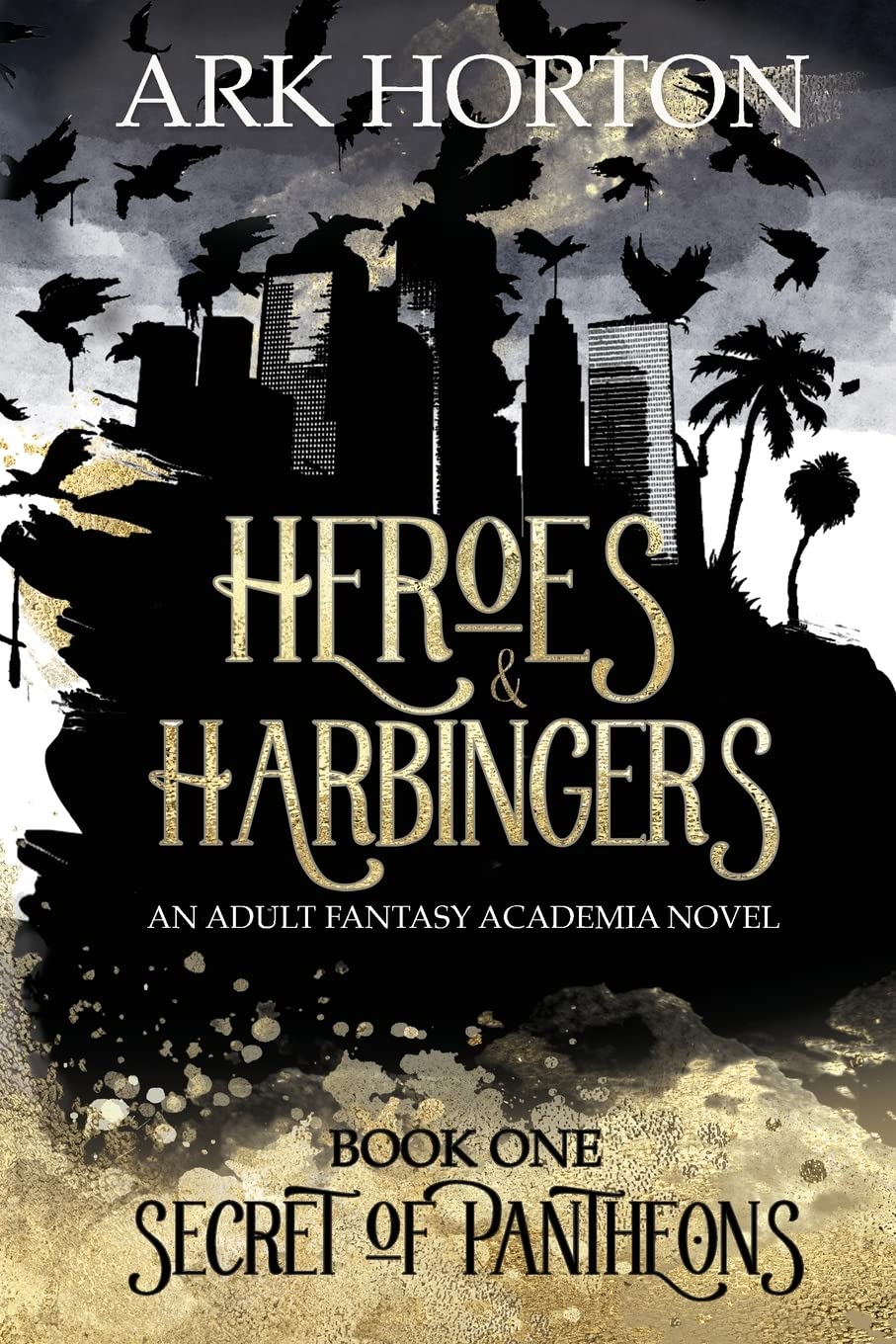 Why not get it from Amazon, via the handy link below? Please note, not only will you be supporting the author, you may also be supporting me by way of a small commission from any items purchased (and no, it won’t cost you anything extra!).