Skip to content
Enter the tapestry of the World Tree. A mother whose music bridges worlds has a child loved by three fathers. A Scottish spymaster. A mountain man hunted by outlaws. A Viking demigod with the secrets of dragons. To be a family they must pay Time’s price” Love. Grieve. Surrender. Fight.

Some books are difficult to pigeonhole; touching upon a number of genres as they craft their tale. Falling Through the Weaving by Leia Talon is one such book, a task made all the more difficult as I work to avoid spoilers. It’s a fantasy story, though, for much of this book, the fantastic elements are narrow, in place to move its story forward. It’s an historical fiction, but the history it uses is different from the history we know. It’s a romance (and an epic one at that), but it extends past the standard singular love interest. It’s a mystery, one that is slowly revealed and links back to those fantasy elements.

Part of a broader world, The World Tree Chronicles, Falling Through the Weaving is the first book in the Roots and Stars duology. Without entering spoiler territory, this novel is firmly part of its duology, ending on a cliffhanger of sorts, with its story to be concluded in the second book, Dragons in the Weaving. I haven’t yet read book two (I don’t want my thoughts about the two books to bleed together, and am reviewing Falling Through the Weaving on its own merits), but will be sharing my thoughts about it on Friday. As a result of this approach, while the ending works incredibly well at enticing the reader to pick up the next book, that next book is required reading to ensure you get the entire story.

The novel tells the story of protagonist Shelta Raine, who finds herself transported from the year 2035 to 1753, by way of a portal revealing itself in a tree, referred to as the World Tree, from which this series takes its name. Shelta has been travelling through time this way for most of her thirty-three years, however, up until this point, she had always moved forward in time. Instead, Shelta was transported back in time by almost three hundred years (“A mighty long jump,” as a character refers to it), and instead of finding herself in Canada as she expected, she was transported to Scotland, in a past that is different to what the history books taught her. Shelta soon meets Killian Maclean, and love blossoms.

The preceding plot summary is a gross oversimplification, but to provide more detail would be to risk spoiling the surprises Falling Through the Weaving has for its readers. The blurb, included at the top of this review, hints at more, and there is so much more to it. However, that ‘so much more’ is best left for the reader to discover.

At 453 pages in paperback (or an estimated 411 pages on your favourite eReader—or, in Shelta’s case, your AIO (all in one)), Talon uses this page count to fully explore everything that comes with this story’s plot. However, with its twists, turns and overarching mystery, at points, Falling Through the Weaving felt a little too long, particularly in its first half. Though the book moves at a deliberate pace, delicately unveiling the story and romance, it still feels longer than it needs to. During the second half, the story’s pace picks up and works better for it. As it moves towards its climax, answering questions that earlier parts of the book asked, it comes together beautifully.

A large portion of this first half is dedicated to the slow burn romance between Shelta and Killian. Through much of this half, their interactions are cute, with the characters getting to know each other, peppered with Shelta’s attraction to Killian. But aside from a few moments between the pair where they bond, the romance kicks in and progresses a little too suddenly for my liking, with the fast-moving relationship not feeling entirely earned. Throughout the second half of the novel, as this thread continues through Falling Through the Weaving’s twists and turns, the book is more successful.

While the pacing and early development of the romance don’t entirely work for me, Talon’s prose more than makes up for it. Written in the first person, from Shelta’s perspective, the writing is evocatively lyrical. The author uses this prose to present a world full of beauty, no matter how ugly the events it conveys may get. This lyrical prose fits perfectly with an overarching theme of music present throughout the book (conveyed through Shelta’s musical nature, and her head filling with music whenever she travels through time), and oftentimes, I found reading this prose was akin to reading the lyrics of a beautiful, emotive song. While the love scenes in this novel are steamy, they too, are presented beautifully, reading more like poetry than erotica.

As the narrator and point of view character, all of this novel’s events are told from Shelta’s perspective. Talon has crafted a wonderful character, a fully formed human being with needs, wants and desires. Through her narration, readers are treated to her backstory and her innermost thoughts, providing far more detail about who this character is, and far more opportunity to empathise with her than the plot allows. This is blended into the narrative masterfully, beckoning the reader to keep reading to learn more about her character.

As Falling Through the Weaving provides such a deep exploration of its protagonist’s perspective, the book’s other characters are coloured by that lens. These characters aren’t explored with the same level of depth, but they remain engaging. Killian, who much of this book explores, receives the majority of this attention. His character is well-defined and thoroughly enjoyable, but shines brightest, not thanks to his character, but because of Shelta’s viewpoint of him.

While Falling Through the Weaving’s mystery and fantasy elements draw the reader in, at its heart it is a story about love, written in a manner that is evocative of such love. Although some of the pacing feels a bit slow and the romance’s initial progression doesn’t feel earned, overall, this is a majestic story, presented in a beautiful way.

That night, in the swirling world of dreams, dragons staked their claim on the castle towers, including the crimson friend I’d been missing. Little ones played, flying and tumbling through stone-framed windows while their massive cousin perched on the heights.

I watched from the battlements of the highest turret, the red dragon roosting above me with wings that gleamed with veins of gold. A pair of dragons zoomed past, streaks of blue-green and pearly-grey that spiraled through breaks in the walls and whatever other obstacles they could find.

Falling Through the Weaving: Roots and Stars, Book One, “Confessions”

Falling Through the Weaving: Roots and Stars, Book One was provided by StoryOrigin for the purpose of an honest review.

Falling Through the Weaving is available in both physical and eBook forms from book retailers (including—but not limited to—Amazon). 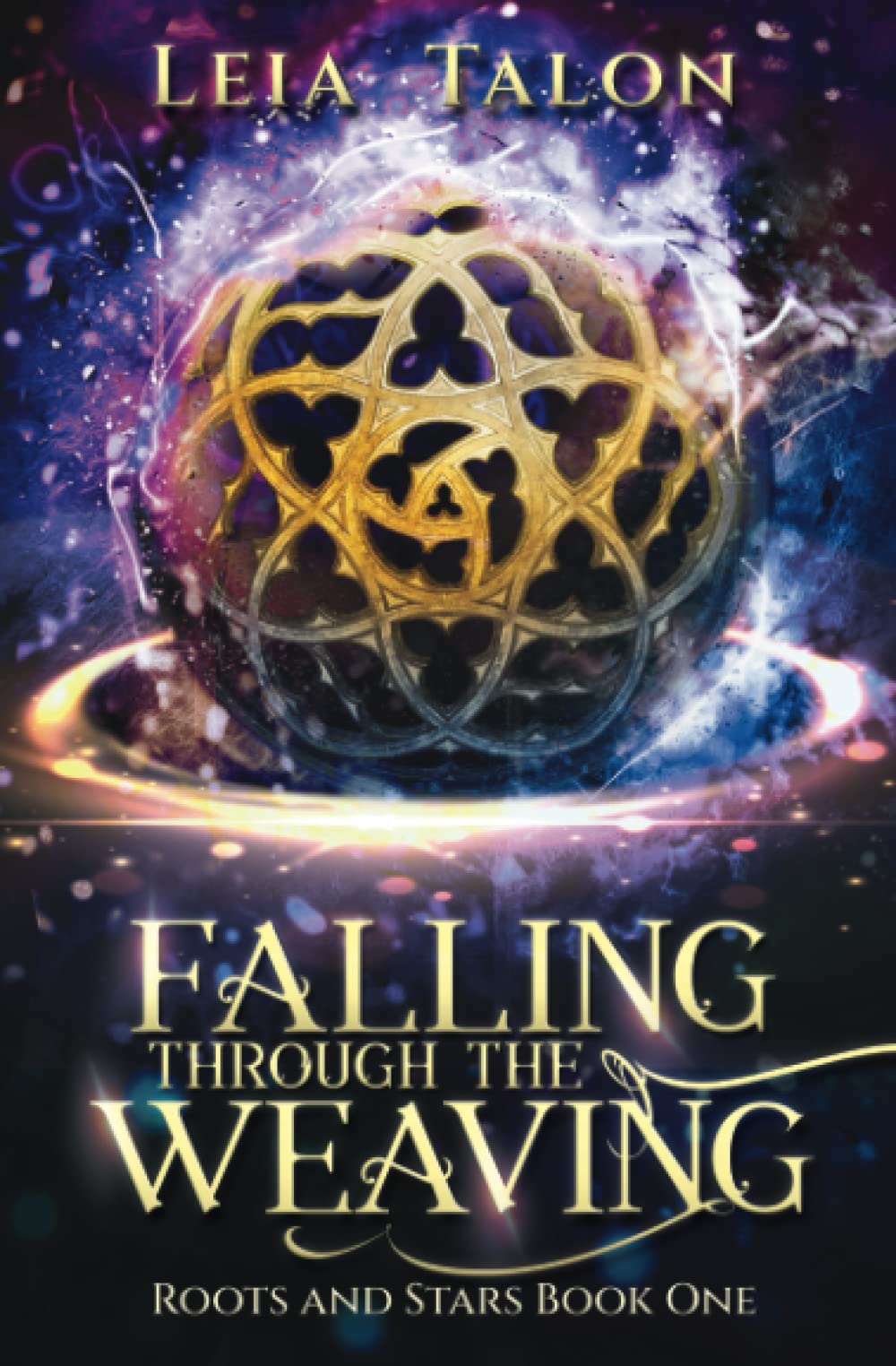 Falling Through the Weaving: A Time Travel Fantasy Romance (Roots and Stars Book 1)